Esteemed Qazawatpooh Fazil Ahmad Manawi- nominee and acting Minister of Justice today morning had a meeting with Ms. Serio Bozuro Kova, deputy director of the United Nations Development Program (UNDP), and both discussed cooperation of UNDP with the ministry of justice.

At the meeting, Acting Minister of Justice said that, Ministry of Justice wants to avail the existing opportunities of international cooperation with an aim to make the activities of this ministry more useful and effective.

He added that the current method of legislation in the country is classic and it is intended to be modernized. He further added that notwithstanding the fact that we need to have an open legislative system so that the people and elites could see themselves in it and are kept in picture with regard to the drafting of laws, "Legislation has a mechanism of 50 years ago”. 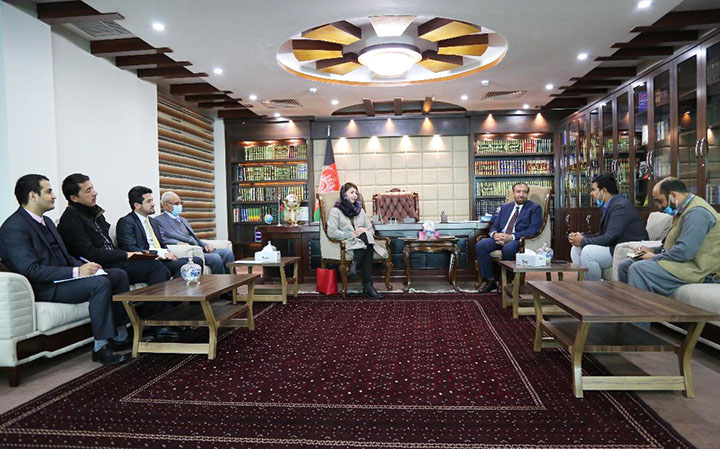 Fazil Ahmad Manawi said the laws should not be prematurely and hastily amended or revised and must be responsive to the context of a few years later. He added that we need earnest innovation to modernize the legislative system and called on the UNDP to work with this ministry in this area.

Deputy Director of the United Nations Development Program (UNDP) declared their readiness to cooperate with the Ministry of Justice in the legislative and policy-making fields.

Acting Minister of Justice also referred to the Ministry's needs in the departments of Huqoq, State cases, Legal Aid and Legal Awareness and to combat human trafficking and migrants smuggling and said that the Ministry of Justice's concepts in these arenas will be shared with the UNDP office.

He said, with regard to the rights, legal cases in particular family cases must be resolved through informal justice and mediation so that the process of ensuring justice is shortened and the courts do not face a stockpile of cases and the citizens are satisfied accordingly.

Acting minister of justice emphasized that no one's rights should be wasted in the state cases area and thus justice be ensured and a system needs to be created for realizing it.

Referring to legal aid to the citizens, he also said that the number of defense lawyers is low considering the volume of the cases; however, the defense lawyers must also be present in districts and in vulnerable localities. At the same time, he said, it is difficult for the government to expand the organizational structure as per the requirements, and that is why international aid is needed in this arena.

Fazil Ahmad Manawi also said that they want to expand legal awareness to the people by establishing a legal radio or television so that the people are well known about their rights.

Meanwhile, Ms. Serio Bozuro Kova, Deputy Director of UNDP said that justice is the backbone of society, and leads to the prosperity and progress of a society.

She assured that her office will recommence its cooperation with the Ministry of Justice in the mentioned arenas and is willing to open a new chapter of cooperation.