Dr. Zakia Adeli, Deputy Minister of Social Affairs of the Ministry of Justice, discussed with Ms. Romana, Head of the Rule of Law Department of the United Nations Assistance Mission in Afghanistan (UNAMA) and their entourage.

In this meeting, Deputy Minister of Social Affairs of the Ministry of Justice spoke about citizens’ access to justice, and said that, in the recent years, by the establishment of High Council of Rule of Law and Combat against Administrative Corruption, effectual measures have been taken in the course of access to the justice. 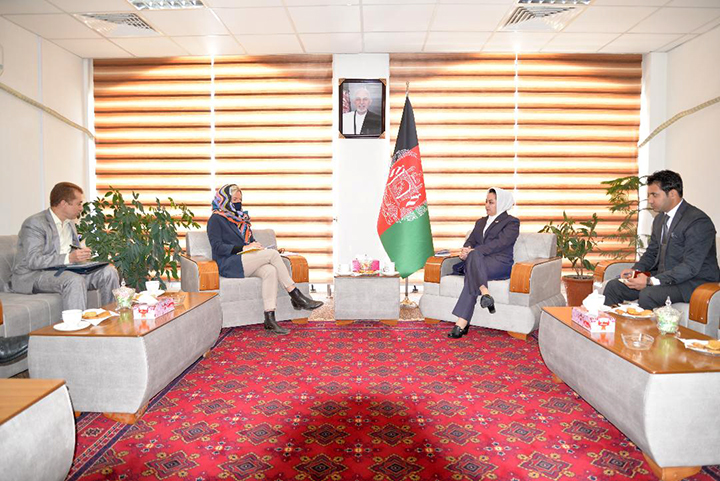 At the same time, she highlighted that, these measures are not enough, and should be accompanied with more coordination and improvement of observational mechanisms in order to provide more efficient access to the justice for the citizens.

At this meeting, the participants exchanged their ideas with regard to the peace process, the prospect of justice and judicial system and the women’s status in the aftermath of peace with the Taliban as well.

The head of the Rule of Law (UNAMA) Office also undertook for continued support of the United Nations for the Afghan peace process and the protection of the status and rights of women, especially in the justice system.

The representatives of a number of agencies and civil society organizations in a meeting with Gul Mohammad Gulzai- Deputy Minister of Justice in Financial and Administrative Affairs. . .

Read more about Acting Minister of Justice Says; Legislative Drafting Needs to be Modernized as is Still Performed with an Old Mechanism Applicable for Fifty Years

Esteemed Qazawatpooh Fazil Ahmad Manawi, nominee and acting minister of Justice, presented and introduced a new draft labor law to the House of Representatives. This law has been. . .