Mr. Manawi added that the new Professional deputy minister of justice will discharge his duty successfully since he has a lot of experience in the field of legislation. 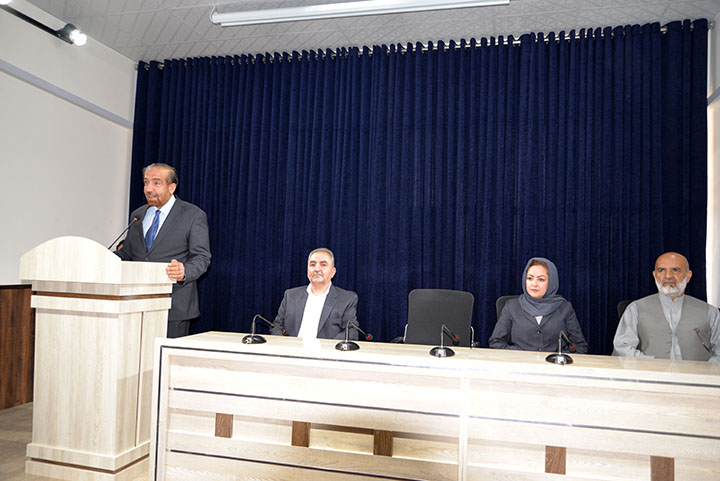 Professor Manawi said that his commitment is to bring changes and reforms to the Ministry of Justice and to facilitate the process of providing services to the people. He wished success to the Deputy Minister of this Ministry in working affairs to help bring reform in this Ministry.

Minister of Justice stated that “This is the first proposal for appointment based on a joint decision made by the leadership team of Ministry of Justice void of any kinds of political preference being sent to the president of Islamic Republic of Afghanistan. As I had promised on my very first day of occupying the post, I hope to have proved that meritocracy is an unshakable principle in my life.”

At the same time, Abdul Majeed Ghanizadeh, Professional deputy Ministry of Justice, thanked the leadership of the ministry and the presidency for their trust and stated that he will make all his effort to carry out this responsibility effectively along with the support of all his colleagues. He assured that he will spare no effort in implementing the ministry's reform programs.

Mr. Ghanizadeh was previously working as General Director of Taqnin of Ministry of Justice.

Qanunpooh Fazil Ahmad Manawi the country’s minister of justice introduced Abdul- Majeed Ghanizadeh as the Professional Deputy Minister of Justice through a formal ceremony to his. . .

Read more about Professional Deputy Minister of Justice is introduced

Speech of H.E Fazel Ahmad Manawi, Minister of Justice of Afghanistan In Virtual Meeting  On Building Peaceful and Inclusive Societies through Justice for All

Read more about Speech of H.E Fazel Ahmad Manawi, Minister of Justice of Afghanistan In Virtual Meeting  On Building Peaceful and Inclusive Societies through Justice for All