The minister of Justice of Islamic Republic of Aghanistan, “qazawatpoh” Fazel Ahmad “Manavi”, participated and addressed the audience in a consultative meeting about improving the quality of media coverage and its Legitimacy. H.E in this session by insisting on principle of freedom of speech said, “Outreaching information is a principle; but more important is the national interests.”

The consultative session for improving publication quality and legitimacy of media functions was held on 4th of July, 2021in government media center in which, number of ministers of cabinet, senior officials of government and in charges of media participated.

H.E Minister of Justice while addressing, called the freedom of speech the greatest achievement of government and people in the past 20 years and said, “Freedom of speech topic is clearly recorded in the constitution and other relevant laws; meanwhile, defending homeland is considered national duty and responsibility  of all according to these laws.” 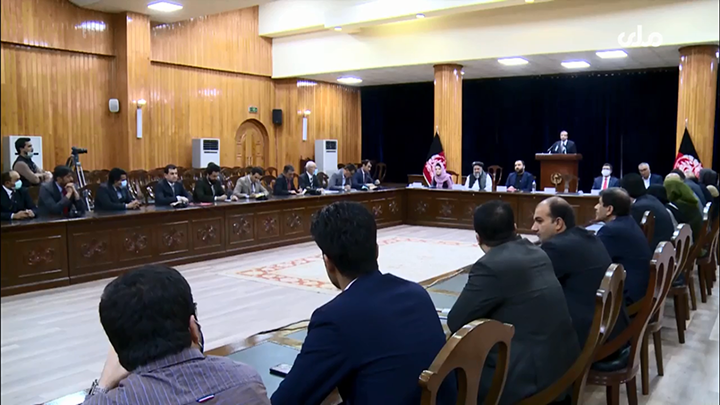 H.E Added, Afghanistan has had well and fast progress in the section of freedom of speech compared to regional and many countries of the world, which is our pride and it will remain ours at any cost.

Mr. Manavi Clarified,” what I am ensuring you is that, we will never return from the path we have taken; which means, by emphasis, freedom of speech will remain recorded in the laws of Afghanistan.”

He meanwhile said everyone knows about the current situation of the country. All, in this type of situation shall act with line of responsibility, for the sake of country among them the biggest responsibility is of the media and its authorities or in charges.

Fazel Ahmad “Manavi” Clarified, exposing military secrets in all current and prior laws of Afghanistan in section of freedom of speech are exceptional (not shared) which is a principle of media.

He said, “Transformation of information is a principle and people shall be aware of everything, but national interest are far more important, if our national Interest fall into trouble, it is not important to misuse from the situation under the name of freedom of speech.”

Mr. Manavi insisted that, system and country is like a boat and protecting them is like protecting national interests. He said, we shall not let the advertisement be used against the independence and national rule of Afghanistan and result at breaking our national unity.

Mr. Manavi, by demonstrating to article 59th of the National Constitution clarified that, no one by misusing the rights and freedoms of this law act against our independence, territorial integrity, national sovereignty and national unity.

He added, based on this law, we shall not let anyone to advertise against our independence, our territorial integrity and sovereignty of the people and question our national unity.

He further added, in some areas we have witnessed the enemy trying to break our national unity, but has failed to do so. But some either intentionally or unintentionally touch such topics in the situation that does not suit to discuss them.

Eventually, the Minister of Justice called upon media to call the Military officers who die for defending the people and country martyred “Shaheed though, in lighted in law but is not obeyed unfortunately.”

In this session, Minister of Hajj and Religious Affairs, acting minister of information and culture, acting attorney general, deputy of Ministry of women Affairs, Afghanistan Journalists’ federation representative also talked about responsibilities of media and government in this type of situation.

The Minister of Justice looked over the status of legal awareness

At the meeting, the Minister of Justice, “Qanonpoh” Fazel Ahmad Manavi, went through the status of legal awareness of citizens and pressed the need for change in this area.

10 people in numbers attained their citizenship of Afghanistan

The minister of Justice of Islamic Republic of Aghanistan, “qazawatpoh” Fazel Ahmad “Manavi”, participated and addressed the audience in a consultative meeting about improving the. . .

Read more about Minister of Justice:  outreaching Information is a principle while national interests are far more important