At the meeting, Dr. Abdul Basir Anwar, Minister of Justice, spoke on the subject: The Government of Islamic Republic of Afghanistan as a member of the United Nations and committed to international commitments, has so far acceded to seven Conventions and three important Optional Protocols of Human rights and is obliged to implement the said documents. He said the implementation of international human rights obligations, and in particular the implementation of international human rights conventions, would require a coordination and follow-up mechanism at the government level to facilitate the implementation of international human rights obligations. To this end, the Human Rights Support Department was created as a ministerial mechanism within the Ministry of Justice and other ministries and government agencies were required to work closely with this department. It functions in accordance with the Human Rights Support Regulation in government departments. 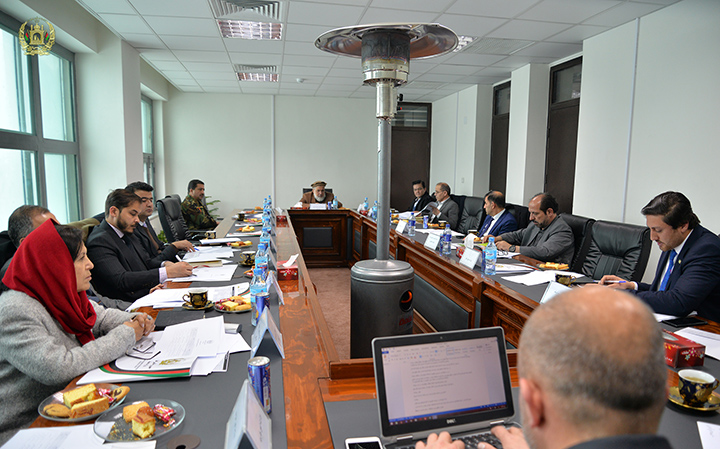 He added that in recent years there have been many activities and efforts for observance, protection and realization of human rights. Legislative documents, policies, strategies and work plans of government agencies have been prepared and aligned with human rights principles and standards, and many efforts have been made to increase the human rights capacity of public administration staff.

He called on the participants to submit their views on the ToR of Coordination of Human Rights Committee and likewise, on the manual to follow-up the implementation of the International Convention on Human Rights in government departments already provided to the representatives of the departments, and finalize and approve them. Also, make appropriate decisions as proposed by the previous meeting on membership of one of the civil society organizations.

He also called on all government agencies and departments to cooperate in full with the Ministry's human rights department and pay more attention to the implementation of international human rights obligations.

At the meeting, the Director of Human Rights Support Department of the Ministry of Justice provided a report on the implementation of the previous session's decisions and the setting of indicators and it’s sharing with the agencies, and the draft ToR of the Human Rights Coordination Committee was discussed. As a result, the Coordination Committee's ToR was approved with a series of reformatory views, and the consensus was reached on the modality to select a representative of civil society to the Steering Committee.

The ministry of justice conducted the fourth round exam of legislative stage program for the year 1399.

This exam was conducted in Afghanistan Civil Services Institute on Wednesday Feb. . .

The Ministry of Justice convened the third round exam for translators of Kabul Translation Centers for the purpose of implementing the provisions of the law on translation and. . .

Reform of laws is the main goal of the Ministry of Justice, which gets materialized through outlining, drafting and scrutinizing of the legislative documents,. . .